Keith, is that you? 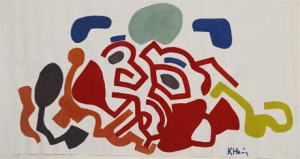 I took the stranger’s call. His voice was deliberate, a deep and sonorous blending of world cultures – American, French-Canadian, Hebrew, and Moroccan. His words evidenced a lifetime of practical, aesthetic, spiritual living. I experienced this message as a wake-up call to the timeless place of art and spirit within my mind and heart

He read my words, he said. More importantly, he had read the words I transcribed from dialogs between myself and my friend, Keith Haring. He introduced himself as a collector who had in his possession dozens of works of art that, by amazing circumstance, were said to be from a secret collection of hundreds of pieces executed by Keith in the early to mid-1980s.

His account of the history of the works and how they came into his possession was replete with astounding, yet credible, detail. Each time I asked a pointed question, sharpened by my own knowledge and experience of Keith’s life and work from that period, the responses were sound.

Purchased three years ago by a tripartite partnership that has since been dissolved – the works divided among the three men – my caller’s part of the collection numbers near fifty works of art. They possess a well-researched and documented provenance indicating they may very well be from the hand of Keith Haring. And they have never been shown before!

The caller, Victor Lallouz – a filmmaker, art researcher, and collector – had read my account of the collaborative work Keith and I had initiated in the 1980s. I was an early writer on Keith’s art and Keith acknowledged my work held certain qualities he valued. After an extended period of personal and professional interaction, we conceived a collaborative project and, in 1985, I received a grant from the Pennsylvania Council on the Arts to initiate the work.

And now, decades later, Victor Lallouz was informing me that he had been researching The Project on the Internet and was moved to make contact. We agreed to be in touch and bade each other farewell. My mind whirled with the absolute surrealism of the situation.
Shortly afterward, Victor sent me a photo of one of the works. And within a few months, I received images of his entire collection – a stunning group of fantastic artworks filled with the early iconic images of Keith Haring. I have also traveled to Montreal to see a selection of the work for myself. A bond has developed between Victor and me. He is a true collaborator.

The process of having these astonishing artworks authenticated by the foundation that bears Keith’s name is beginning. Now, the story of the collection – in all its revelatory potential is being told. This is a wild and stormy story of trash and transformation, love and loss, pleasure and dissolution, suffering, recovery, and potential redemption. It is a narrative of freedom and responsibility defined and confined by art history and post-modern global events – an evolving story whose ending is still unwritten.

*
Images from the collection of Victor and Sultana Lallouz