Heart. Mind. Moment. Universe. These are one thing.

Our lives are one single infinitely interconnected event.

Reading Lies. Nothing Dies. Whatever you think is real…Keith is that you?

As I have devoted the last few months of ARTology to the above matters, other topics have been unreferenced. For example, I have been making some progress working in areas such as creating visual and conceptual art, observing consciousness, nature, culture, and the universe at large, and teaching. Now I will begin again including entries on these topics.

In order that readers with an interest in narratives concerning my relationship to the life and work of Keith Haring may easily access this material, I will on occasion publish and update the following list of project-related ARTology entries.

Keith is that you? Part 0a: You decide.

*
I have uploaded an image gallery of the Victor and Sultana Lallouz collection of artworks said to be by Keith Haring.

Write to me if you are interested in seeing the work.

Continuing in the spirit of ARTology entries related to the collection, I encourage you to see for yourself this significant portion of the 300 recently discovered works that have already made their multi-million-dollar mark on the Montreal art market.

We are in the unique position of being a part of this emergent story. All that is needed to participate in the excitement of imminent discovery is a clear eye, an inquiring mind, and a passion for truth.
*
Image: Keith Haring at the No Nukes March, NYC, 1982. Photo by Tullio Francesco DeSantis.

Whatever you think is real… Part 2 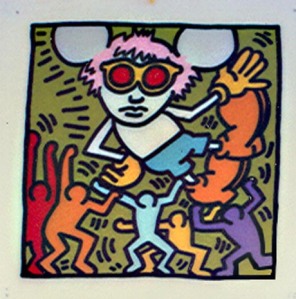 *
A long, dank alley leads to this place. Each time I arrive, it is completely different – as if it is a stage with movable sets, variable lighting, and a new cast of characters.

This night, it is deep brown – a thatched hut as big as a barn. I am being led there from the street by children – boys wielding short cutlass-shaped knives. They surround me and urge me to move toward the ceremonial structure. Their language is rough slang – the language of the criminal street.

Two men, their heads covered with black hoods are dragging bundles of paintings. I catch glimpses of the works and they look like the work of Andy Warhol. I am convinced they are fakes. That must be why there is such an atmosphere of criminality suffusing this dreamscape. Or else, it is the air of criminality that convinces me of their counterfeit nature.

We enter the enclosure. I am held back by the gang of ruffians. The two hooded men move toward the illuminated area at the far end of the hut. There, lit by a single cone of golden light stands Warhol. He is in obvious control of this situation, as the others respond completely to his directives.

I question the boy who seems to be the pack leader. His eyes are fixed on me. I ask him what he is doing. He tells me he is looking deeply at my face and into my eyes to see if I am a good man. He says this with the utter confidence of one whose skills are well-known and respected. He indicates his satisfaction that I can be trusted and tells this to the others in the room.

I speak out. “I don’t understand. These are not real. Why are you doing this?”

A voice emanates from everywhere at once. “What is real is not important.”

Passive and dumbfounded in this perverse underworld, I stand in silence and observe the creation, bundling, and packaging of lie after lie.

The situation as regards the influence of Andy Warhol on Keith Haring is a subject to which I have only occasionally referred. I have stayed away from it because the subject has always left me feeling somewhat uncomfortable. Keith knew my thoughts about Andy’s relationship to the evolution of post-modern ethics. And he knew I took issue with the influence Andy’s work was having on the culture in general. It was clear to me also that Keith had a great deal of fondness for the man.

Looking back, I see that by 1985, a polarity was developing within Keith’s sphere of influence and influences – those who were having an effect on his thinking and also those whose lives he was touching. 1985 was a pivotal year. It was the year the idea of the Pop Shop was being born and the year in which I could see Keith coming increasingly under the influence of Warhol. I also sensed a lessening of my own ability to have an effect upon Keith’s thinking.

Nothing was or is simple about Keith Haring. This was and still is true of my relationship with him. When I met him, he was best known as the “unknown subway artist.” He was a young artist hitting the streets and the art scene for the first time. He was doing this in New York City. I had done the same a decade earlier in San Francisco. There were both similarities and differences between us. Both were good for the relationship.

But I held back when Keith would talk about “Andy.” Keith knew I was concerned about the amorality of Andy’s vision, his glorification of decadence, and the apotheosis of vapidity represented by Andy’s aesthetic image. I was not in any way insistent about my views, however. I could see Keith saw Warhol in a different light. I saw that as a youthful lapse of character judgment and for the most part, I overlooked it.

In hindsight I wish I would have pursued the point. Now I am compelled to draw very clear and strong distinctions between the life and work of Keith Haring and the life and work of Andy Warhol. This has become an imperative because of the art-historical trends that have become most fashionable in the past decades. The names of Haring and Warhol appear so often in the same paragraphs that their correspondence has become a historical and cultural cliché.

While we gain very little insight into either artist from these endless comparisons, we do achieve crucial understanding of much of what is most important about both art and life by delineating the differences between them.
*

Image: “Andy Mouse” by Keith Haring, from a Polaroid photo taken by Tullio in Keith’s NYC studio in 1986.

Keith is that you? Feedback

Last week, I had a most enjoyable dialog with Mike Faust, the inspired host of WEEU radio’s Feedback show. We discussed the story I am reporting of the three-hundred artworks said to be by Keith Haring.

Mike and I also discussed the current status of the collaborative project initiated by Keith and me in 1985, which includes plans for a film, book, exhibitions, and archives.

Here are the links: