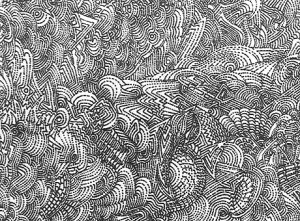 A high-pitched sound reverberates throughout. I do not hear it so much as feel it on the periphery of my awareness. Soon, it becomes painful and overwhelming. I awaken to the persistent ringing of the phone.

“Art, I called a few times. Did you get my message?”

“I crashed man. I’ve been asleep since I got home.

“Oh, too bad. William Burroughs invited me out to dinner. I tried to get ahold of you to come along. He has this amazing mind… We talked about the same things you and I talk about.”

“That’s cool, thanks. I always thought his stuff was really negative.”

“He’s a sweet man, really kind. He was just so nice to me. I felt an instant bond with him. His work is just…you know…his work. I think he’s trying to wake people up.”

“No doubt. So yeah, man, that was a strange trip today, wasn’t it?”

“I don’t know what you’re talking about. I’ve been in town for the last week. So have you, far as I know…You OK, man?”

“Uh, yeah, I’m OK. Let’s get together soon. I want to talk about the Project.”

“Um, well, I’m going to Europe in a couple of days. Can you stop over tomorrow?”

“Sure. You free in the afternoon?”

I hang up the phone and am overcome with confusion. In an effort to feel in control, I trace sequentially through my memory of the day’s events. The fact that there is a sequence – or that I am convinced I can recall a continuous chain of memory linking one thing to the next – doesn’t change the sense of disorientation I feel about each bizarre occurrence.

In some ways, I am excited about the encroaching intuition that things will never again be as they were. If there’s something that characterizes my psyche – that has always been a very strong part of my motivation – it is the desire to reject what is called the “real world” in favor of some other form of experience.

This powerful urge to inhabit another version of the world has impelled me over the years to risk everything in my attempt to satisfy it. It is the addiction that underlies all of the addictions I have ever entertained. And now that I have left those habits behind, I am still driven – driven to penetrate the territories of the unknown.

I’m left with the knowledge that this has happened to me many times before and that it will continue. It is a very familiar feeling – the near-vertiginous sensation of paradigmatic change. To leave behind one world – one reality, one state of mind – and to move through the first stages of a new one is always unsettling in deep ways.

I look up for a moment. The dark-haired girl in the building across the alley is undressing again – in front of the window. About a month after I moved in she started leaving the shades up all the time. Youthful and curvaceous, she is as beautiful as a girl in the window could possibly be. She moves like a dancer until her liquid eyes catch a fleeting glimpse of mine. Tonight though, I look away.

And as I have done thousands of times in the past, I pick up a pen and begin to draw. Making a trail of points to mark each moment, seeing the points coalesce into directional lines, and observing the resulting energetic forms moves me to a more peaceful state – for it is clear, right before my eyes I see that everything from nothing always comes.

Image: “Everything From Nothing,” 1985, ink on paper, by Tullio DeSantis.