What’s Art Got to Do with It? The New Paradigm: Science, Philosophy, Art

“Everywhere I go I find that a poet has been there before me.”–Sigmund Freud.

A paradigm is a mental model for explaining the world and our experience. Mental models are the frames of reference for experience. New paradigms are created from observation, reflection, and imagination: Science, Philosophy, Art.
In this new millennium, we are witnessing the gradual acceptance of new paradigms – world-views, which are radically divergent from the paths of perception and understanding from which they were spawned. Classical physics gave rise to the new physics. A single electron must simultaneously take every possible path in time and space every time it changes location. Electrons can be in many places at once and exchange information instantanesouly across astronomical distances. Elementary particloes do not exist in determinable ways until they are observed by an instrument of conscious awareness. The universe turns out to be more about probability than certainty. And verifiable truth is more relative than it is absolute.
The new metaphors we need to allow us to grasp a more comprehensive view of our own evolution and our place in the universe are being created in our minds and in our conversations in the present. It is an aesthetic project – this evolving awareness. We’re creating this increased intelligence between us…as a cultural artifact – a virtual reality. But before we can build it, before we can become it, we must imagine it.
This is the art part. Aesthetic constructions and experience are essentially metaphorical procedures. Metaphors are bits of aesthetic information, which are able to encode and communicate correspondences, connections between disparate experiences. They are open-ended and they have a relationship to intelligent living systems. Scientific theories, even while being encoded in mathematical terms, achieve the status of cultural memes and shape our view of the world by enlarging the scope of our collective imagination.
Metaphors encode new worlds in new ways. They provide vision tunnels between remote frames of reference. They involve the imagination and are necessary aspects of theoretical models. Our understandings are built upon metaphorical structures. New worlds need new metaphors. We are propelled forward, by our imaginations. This is the good work we all share here…and now. As it turns out, reality itself seems to be a collaborative art.
*
Image: “Mind and Brain 112810” by Tullio DeSantis, ink drawing with brain, fractal, and EEG digital images, 2010.
* 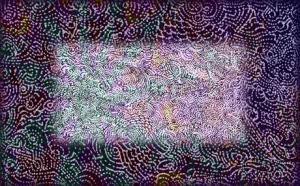 Living in the contemporary world, one experiences a plethora of postmodern paradigms. We have available varieties of world views and we can observe ourselves shifting between them both as participants and as spectators. This is not necessarily a situation which provides any greater degree of freedom than maintaining a particular point of view over long periods of time. It all depends upon the quality of one’s experience, of course. That being said, however, some paradigms may be preferred over others.
Perhaps the most pervasive paradigm of modernism has been the one officially ascribed to the 18th century: Romanticism. This paradigm – an essentially emotional neo-Platonism – is the one that fuels the majority of our fantasies and realities, even today. Variants of Romanticism form the core of our religious/political/theatrical modes of experience.
The other, terribly significant worldview that holds sway today is Existentialism. Initially, a thoroughly intellectual enterprise spawned by a revulsion for the restraints and excesses of inustrial and post-industrial civilization, popular forms of existentialist philosophy permeate contemporary worldviews. These operate as pragmatic neo-Aristotelian attempts to accept the unfeasibility of our Romantic desires and to focus our attention, instead, on the material world.
There are many worldviews, of course, from the atavistic urges of our somatic selves to the lifestyles of the rich and famous, I suppose. And because we are alive in an era with the entire global range of worldviews available at once, things get confusing. Contemporary experience conflates worldviews and shifts paradigms in the blink of a photon receptor.
In general though, it is quite apparent that many of our fantasies, dreams, realities, entertainments, and personal stories are played out in predictable narratives that are pinioned between the poles of Romanticism and Existentialism. This is the predicament of postmodern humanity.
It is remarkable how the philosophies of mankind are reducible to forms of idealism on the one hand and materialism on the other. This is what is behind the Romanticism/Existentialism discussion above. The world’s religious traditions are essentially idealistic, while scientific worldviews are man-made marvels of materialism. Many of the rest consist of ad hoc combinations or collages of socio-cultural perspectives.

It can be said however, that we are experiencing a planetary shift toward some new paradigmatic view. As I dedicate my work to the aesthetic dimension of this effort, it is somewhat rewarding to see things on the verge of changing within my lifetime. But it is not so clear that the change occurs…at least, without considerable additional work.
Welcome to another day of work on the new paradigm. Future entries will illuminate some of the signs that may indicate our position on the path…

Something from Nothing, Part 2

“Because there is a law such as gravity, the Universe can and will create itself from nothing. Spontaneous creation is the reason there is something rather than nothing, why the Universe exists, why we exist.”- Stephen Hawking and Leonard Mlodinow, from “The Grand Design”
*
My previous entries here have set the stage for this position. It is, of course, thoroughly in agreement with ancient Vedic wisdom, which sees the universe as eternally self-generative and it is not so far from the Buddhist notion of “the void” from which all things spring and to which all things return.
*