Astronomy is the middle section of a three-part series (Cosmology, Astronomy, and Biology). This collaboration involves combining my text and sound (audio and music) with the creative imagery of Pery Burge, artist in residence in the Thermofluids lab in the College of Engineering, Mathematics and Physical Sciences at the University of Exeter, in the UK. We will be creating some new music, sound, and image work again soon.We hope you like Astronomy. It is our place in space*(The full text is below)*Astronomy

A Bang that no one hears! A
soundless cataclysm in the most cavernous gaping void the most imaginative
among us can ever imagine..we name it “creation of the universe”

One to the minus 43rd
power of a second…

Microsecond epochs, many of them

There comes to be a swirling
primeval system

Some – thing from no – thing

The phenomenal proof of material
truth

Fill the void – the void filled
with substance

The prime cause of all structure

Many parsecs of Nebulae,

Of dark energy in filamentary
networks

All in a billion years

Complex folds in the fabric of space

These cycles recur in billions of
years

Observes… itself, himself, herself

It is you and I

It is our eyes and our space
telescope

Embodied and externalized nerves
and brains

Our world-wide networked web of
intelligence

Our outer space probes flung far
toward the void

…of intelligent minds.
– by Tullio DeSantis 2012

Comments Off on Astronomy

Text and Audio by Tullio DeSantis, Imagery by Pery Burge, 2012

This is a project, in which I’m
collaborating with Pery Burge, who is working as artist in residence in the
Thermofluids lab in the College of Engineering, Mathematics and Physical Sciences at the University of Exeter, in the UK. We have been sharing files over
the Net and building the project in bits and bytes.

This piece, entitled, Cosmology, is the initial piece
in a projected three-part project. When
they are all complete, the order will be: Cosmology, Astronomy, and Biology.
Biology was just published and we’re working on Astronomy now.

We hope you like Cosmology. It
is a celebration of existence.

(The full text is below)*CosmologyWithin an inexpressible
nothingness

Through a timeless duration

A perturbation of time-space

Quantum
entanglements unify the infinitesimal aspects of virtual particles into
momentary states between existence and nonexistence, while precise cosmological
constants undergird the multitudinous dimensions of space-time

On every level at every scale

All energies in motion flowing
from randomness

This inexorable movement of
nothingness in its unstoppable flow toward existence

Occurs everywhere and all at once
it is called cosmos

Universe as it is unity itself

And multiverse, for there are many

Numberless stars preceding even
the idea of number

The infinity that supercedes all
conceptions of infinity

Things are in constant states of
transformation. They’re patterns of energy
discrete states changing instantaneously into form from formlessness and
back again.

Eon after eon of material flux

The ground of all being –
persistent perpetual flow

All this, the substrate of future
experience, experienced by no one.

And yet, and yet…

This is a project, in which I’m collaborating with Pery Burge, who is working as artist in residence in the Thermofluids lab in the College of Engineering, Mathematics and Physical Sciences at the University of Exeter, in the UK. We have been sharing files over the Net and building the project in bits and bytes.This piece, entitled, Biology, involved sending my text to Pery, Internet communications on composing the project, and sending her a recording of the text, to which she responded with sensational aesthetic imagery. We discussed a sound track, I recorded some things, and Pery used some of what I recorded, weaving the soundscape through the four-dimensional structure of the piece. We hope you like it. It is a story of life.(The full text is below)*Biology

The bio-urge, an impulse toward

Soaking up light and heat

On the long long journey

The cataclysmic explosions of
energetic connectivity

Forced together against the
repulsive tide of insensate crystallographic

A circumstance of coincidence

The threshold of life

In that vast unknown space

A living web of it from day one

Until it covers the whole wet
world in a Cambrian effervescence

In a supersaturated oxygenated
ecological space

Those first vestigial finned
creatures and their early ventures

Stranded on land with the
inexorable slowness of genetic shift

Moving toward land and a new
horizon

The Silurian adventure pioneering
steps over the barren land

Plants and animals respiring
together

Over the Pangean landform

And tyrannized the entire Triassic
bestiary

Into convulsive fight and flight

Over the great plains of the
middle Mesozoic

And wild pterosaurs winged their
way through oxygen rich atmosphere

Whales horses, early primates the complexifications
multiply, elephants and grasses on which to graze moving the timeline toward 50
millions of years before today

And perhaps 10,000 years ago
civilized cultural human civilization networked intelligence to see and know
now how we have become what we are

This web of living tissue, of
which we are a part, is the life of the planet our hearts and minds at once within
a vast interconnected organism alive a life alive as one life form alive a life
alive…
–
by Tullio DeSantis 2012

This entry is in the process of being reconstructed from available links and archives.

My work with EEG biofeedback and brain/computer interface technology can be found at:
http://www.mindreflector.com

Here is a list of links to my recent articles on EEG
neurofeedback, brain-imaging research, and matters of mind and consciousness.

Mindwaves,
The Art and Science of Self-Awareness

Brainwaves,
Part 2: What is Neurofeedback?

Me
and My Brainwaves

Mind Reflections 001 – Where is the Mind? 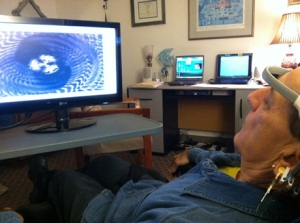 Perhaps the most interesting aspect of working with brain-computer interface technologies during the past several years has been researching the various theories of mind which inform contemporary neuroscience and cybernetics and how these theories relate to practical applications in information technology and clinical psychology.

There is a great impetus today, to see mental processes as being entirely physiological. That is, the mind is explained as being somehow produced or generated by the brain. In many ways, this has become the dominant paradigm. This is a reductionist approach, which can demonstrate that phenomena of mind have physical correlates. It supports the existing materialist bias, which informs chemical explanations and pharmaceutical approaches to psychological processes.
Often overlooked, of course, is the logical problem of attributing causation to correlation. In other words, the fact that neural correlates of conscious states can be demonstrated to exist does not prove that consciousness is generated by the status of neurons. It proves only that there is a correlation between these two observed phenomena.
This kind of problem almost completely informs the current thinking on artificial intelligence. It is commonly stated that human intelligence is something that can be reproduced by machines, given sufficient advances in hardware and software. The corollary of this idea is the notion that this can be accomplished by the creation of artificial neurons, since consciousness and therefore intelligence is a function of neurons. This analogy breaks down if the correlations are coincidental and not necessarily causative.
More interesting, I think, are other, less reductionist notions of consciousness, called “externalist” by some and “enactive” by others. The externalist position is exemplified by Andy Clark, Washington University, and David J. Chalmers, of University of Arizona, in their paper The Extended Mind. This refers to the idea that our consciousness is distributed among aspects our perceptual environment, and that it is more properly understood in ecological terms.

The enactive approach is delineated by Alva Noë, of Berkeley, in Out of Our Heads: Why You Are Not Your Brain, and Other Lessons from the Biology of Consciousness. In this significant work, Noë demonstrates that fundamental aspects of our consciousness exist in our action in the world and active perception, as much as they exist within our heads.

These notions of networked intelligence will ultimately, I believe, prove more viable than the simplistic and reductionist materialism that now dominates the fields of psychology, pharmacology, neuro-biology, and the cognitive sciences. More inclusive and comprehensive descriptions of consciousness indicate emergent properties, as well as observations that mind is a relational process, not localized in this or that particular structure.
In my work with EEG neurofeedback technology, I do experience the very clearly demonstrated fact that our instruments record data generated by the mind outside of the head! That is, our instruments are held in place, close to – but not within the head. And these instruments pick up the classic neural correlates of states of mind, such as waking consciousness, attention, and relaxation by receiving brain wave signals as they are transmitted outside of the brain. This very simple experimental evidence does indeed demonstrate that significant aspects of human consciousness – those that can be measured and by which specific states of mind can be deduced – exist in the environment at large and not simply or solely inside the brain.
The era of brain-computer interaction is here, today, in the laboratory and now in clinical and consumer technology. Each day brings us closer to the technological singularity, predicted by our most prescient philosophers and scientists. The essential insight is already in evidence in the evolution of contemporary technological innovation – intelligence is not device dependent. It is networked.
We are a living part of the network – and so is the rest of the world and the universe at large. Our machines work because they are and have always been a part of this vast interconnected network. Nothing functions on its own. The mind is…everywhere.