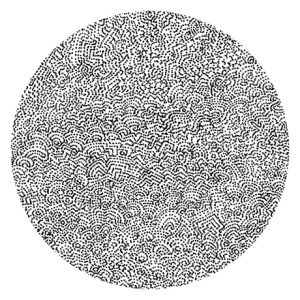 Vibrating in every dimension, matter
and energy form patterns, which are in alignment with universal fields of
force. Pushed, pulled, and spun at sub-atomic scale, waves and particles of electromagnetic
radiation coax elemental materials into crystals of increasing complexity. Giant
molecular proteins coalesce into great chains and spiral through time, carrying transmittable codes of the complex information they contain.

Patterns persist and spawn other,
more extensive, patterns. Early sparks of life emerge and reenact the push and
pull of physical forces in the pulsations of their very biology. The place
where life resides is a kind of inner amplification, a concatenation, a locus
of physical forces. From the tropisms of plants to the myriad urges of animals,
life forms adapt to environments and to each other. They learn and change in deep unpredictable ways. And the entire ecosystem is transformed. Coevolution occurs.

Cells to neurons, from the analog flow of chemical reaction to the digital transmission of neuronal spikes, particles and waves of biological information transferred from
generation to generation are living islets of stability amid the chaos of
incessant environmental flux. Nervous systems learn to achieve states of
resonance with each other across the distances separating them. Synchronizing
sound and visual cues, living beings set up complex patterns of
interrelationship. Intra- and inter-species communication creates invisible linkages
between individuals, resulting in a vast arc of transcendence crossing space
and time, and uniting the entire biosphere.

From matter and energy to life and
thought, the complexification and interiorization of the universe evolves at an
exponential rate. Intelligence emerges and the universe becomes aware of itself.

This interconnected matrix of interiorized
experience, moving through time, becoming us…is us. This web of life and its
inner surface – the universe of conscious experience, these patterns, this intelligence – is who and what we are.